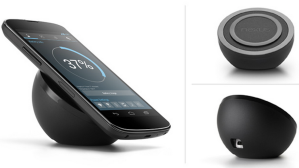 I finally got my hands on the Nexus wireless charging Orb. I have to say it is one of my favorite phone accessories so far.

If you’re like me plugging in the micro USB can be a pain, trying to figure out which way it goes in and sometimes having to do it twice because you got it wrong the first time. That’s one thing that makes the Apples new line of mobile devices nice, it does not matter which way plug it in, you could do it blindfolded and it would work.

The Orb was designed by LG. Weighing 130g with approximately 4 hours charge time. It has an angled all black surface with two circular rubber pads that allows your Nexus 4 to lay in a upright position making it easy to see your phone when not in use, although some have experienced it not staying and slipping down the pad. I for one have not experienced this at all, in fact so far it has been completely reliable. I have a slim case on my Nexus and it is able to charge with it on,which was a surprise to me. It uses a Qi inductive charger similar to what some Nokia Windows phone are able to do. There are other wireless chargers that use the Qi technology such as the Energizer Charger, Panasonic TM101. But none as compact and elegant as the Nexus Orb.

The more I use the Orb the more I like it.  Despite complaints some people have made I feel it is worth the money and the best $60 I have spent on a phone accessory in along time.