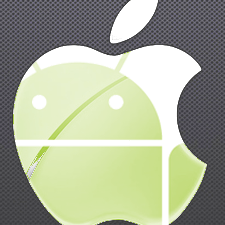 Let me just start by saying this is not a “versus” article.  My intent here is not to say one of these smartphone operating systems is better than the other.  I’m writing this because as anyone who has read this blog before knows that I’ve been a fan and loyal user of Android products for a long time.  I’ve owned the original T-Mobile G1, the Motorla Cliq, the Nexus One, the LG G2X, the HTC Sensation, Galaxy Nexus, Acer Iconia tablet, and Nexus 7 tablet.  After living in the Android world for so long…I felt it was time for a change.

There were a couple of factors that had been keeping me from making the switch to iPhone before now.  The first is screen size, I liked the larger screen on my Android phones and anytime I held my wife’s iPhone I just couldn’t believe how small the 3.5″ screen seemed.  The second was turn by turn navigation…or lack there of.  I find myself looking up addresses all of the time and I’ve come to rely on Google Maps navigation more than I realized.  The fact that Apple never had a very good navigation app was a dealbreaker for me.

Well those things all changed with the release of the iPhone 5 and iOS6.  Sure the new iPhone only has a 4″ screen, but that half inch increase does make a difference.  And the phone is very comfortable for me to hold even in my large hands.  And now we come to Apple Maps…the feature that has garnished the most negative attention.  I gotta say, it ain’t as bad as everyone would have you believe.  It hasn’t let me down yet as far as finding and directing me to where I need to go.  Some may say, “Oh but the 3D maps are terrible!”  Well maybe they were when the phone was first released, but most of those incidents have probably been fixed by now, and how often do you really use that feature any way?

So…what are my impressions of the iPhone after using Android for so long?  Not bad!  Actually, better than that…I love it!  I’ve drunk the kool-aid and find myself liking it.  With Android, I found that I was living with certain bugs or problems because I’d grown accustomed to them and had just learned to live with them.  Certain applications crashing, software lag, widgets not working right, bluetooth and wifi connectivity issues…oh well.  I’ll just reboot, or not do that again, or…enough!  With the iPhone, I found that things just worked the way they were supposed to.  It was actually refreshing.  Yes I lose out on not having active widgets on my homescreen, but I’d begun to learn that those were often the things that crashed most often.  And many times I’d find that instead of reading the information displayed on the widget, I’d just end up clicking the widget to open the full program anyway.

I’ll admit that the iPhone is not perfect for me.  My biggest complaint is Apple’s 50MB limit for downloads over cellular.  I don’t understand this restriction at all!  Who is Apple to tell me that I must be connected to a wifi network to download the next section of my Audible book?    I guess this is just something that I’m going to have to live with also.

One of the reasons I wanted to switch to the iPhone was because of the number of accessories that have always been available…however with the new lightning connector there are hardly any docks available yet.  😦  I actually went out and bought a business card holder to prop up my iPhone at night for my alarm clock app!  But this is a small inconvenience that will change over time.

So have any of you made a similar change?  Or perhaps the opposite…from iPhone to Android?  Let me know of your experience in the comments below.

10 responses to “From Android to iPhone 5…Finally!”