The Samsung Galaxy S II is undoubtedly one of the most popular Android phones available today, with versions on every major US carrier.  Rumors have been swirling recently that the company will be coming out with it’s successor the Galaxy S III soon.  Now a polish blog opda.pl claims to have images of the new device.  As you can see from the image above it is partially blurred and it’s authenticity is in doubt.  It was supposedly given to them by an anonymous source who claims to be testing the device.

If it is real it appears to have a pretty large screen, about the same size as the 5.3″ Galaxy Note.  BGR reported back in Feb that the Galaxy S III will feature a 1.5GHz quad-core Exynos processor, a 4.8-inch 1080p HD display with a 16:9 aspect ratio, an 8-megapixel rear camera, a 2-megapixel front-facing camera, 4G LTE connectivity, Android 4.0 and a ceramic case.

So what do you think?  Is the image legit?  Would you be interested in a 5.3″ screen?  Tell me in the comments below…

Seems that there is a new image of the supposed new phone.  BGR is reporting that the image below was sent to them and several other sites at around 3am this morning.  This certainly is one of the most hotly anticipated Android phones in a while and this appears to be one of the most legitimate image to date. 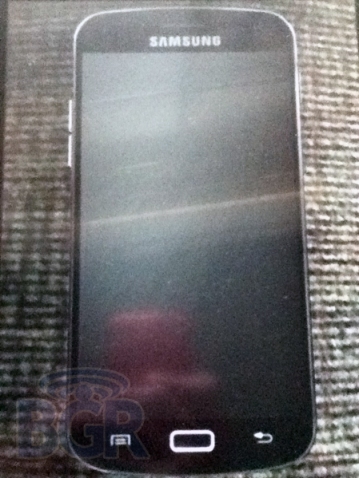 After much speculation and rumors the Samsung Galaxy S III has finally been released.  See my full post here.